Leo Mythology, What is it about?

Leo owes its life--and its demise, unfortunately--to the Olympic god and hero, Hercules or (Heracles/Herakles).

Hercules enters the Leo Mythology tale when his first task was to put the vicious, giant Lion - Nemean to death.

After killing it, Hercules was to bring the pelt of the invincible lion to King Eurystheus. The Nemean Lion was a dreadful brute; he wandered the land of Argolis, terrorizing and obliterating all who came near it in and around the hills of Nemea.

By the way, it is hinted that Selene, (AKA. Goddess Diana/Artemis/Luna/Hecate/Trivia) purposely set the savage free on the people of Nemea in Argolis, they didn’t give her the credit that was due.

At any rate, Hercules' 1st task commenced in a town known as Cleonae, where he rested at Molorchus' house. Molorchus was a poor man. Molorchus volunteered to do a ritual killing of an animal to guarantee safety for Hercules on his hunt. Hercules refused and asked Molorchus to delay the sacrifice for 30 days.

Hercules went after the Lion, The Lion wasn't only bigger, more vehement and more potent than other kings of beasts were. The Lion had an advantage, there wasn’t any wood, metal or stone that was able to perforate its skin.

Not one weapon in Hercules' artillery could slice the lion's skin, in the end Hercules had to use his bare hands to do the deed. They struggled, they wrestled and Hercules at last drove the Lion to the ground and strangulated him.

Thirty days later, Hercules came back to Cleonae to see Molorchus and on his back, he bore the lifeless Lion.

And so, rather than devoting a ritual killing to a dead hero, Molorchus and Hercules offered up a joint sacrifice to Zeus.

Once Hercules returned to Mycenea, King Eurystheus was astonished that Hercules pulled it off. Eurystheus began to dread the sight of Hercules so, the King prohibited Hercules from entering the metropolis.

To avoid Hercules, Eurystheus arranged for a great jar, to be forged in bronze and entombed half way in the earth, this would allow him to hide out from Hercules if he ever needed to.

On top of that, King Eurystheus wouldn't see Hercules face-to-face. Eurystheus conveyed his orders about Hercules' succeeding tasks by proclamation.

Hercules saw the unparalleled caliber of the hide; he employed one of the lion's claws to skin the lion. 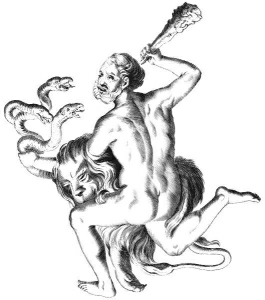 Hercules kept the lion's pelt, and wore it as a cloak it; proved very handy. The Lion's hide made Hercules brawnier than he ever was prior...

It became emblematic to him, establishing in him the character of a lion which helped him in concluding the remaining labors.

Hercules' next job was dealing with the Lernean Hydra, a serpent with 9 heads.

As if fighting something with several heads wasn't plenty, the second Hercules cut one head off the beast would grow two more. 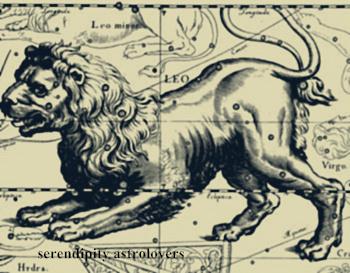 Nevertheless, just as Hercules knew it would, the Lion's pelt gave him a protective cover from those annoying heads, while Hercules figured out how to kill it.

Afterwards, Zeus placed the lion in the sky as Leo the Lion.


And so in this Leo Mythology story Nemean the lion was to became Leo.

Where he lies, the beast polished off by Hercules passes his time dozing in his lair.

In spite of his fangs, Leo is seen as an amiable and tender creature...a caring sire to his cubs and very defensive of his lioness.

The poet Ovid chipped in a different Leo Mythology tale.


Ovid said that Leo is the lion that figures in the sad story of the lovers Pyramus and Thisbe.

One day while talking, they made a pact to converge outside their city by a mulberry tree with lily-white berry fruit. When Thisbe made it to the tree, a lion leapt out from the shrubs all-fired up and bloody from a killing.

Thisbe hightailed it in fear. Unluckily, her veil flew to the ground as she escaped; the lion swooped in and snatched the veil in its mitt. A little while later is when Pyramus got to the mulberry tree, he saw Thisbe's veil all bloodied and interpreted that to mean she’d been killed.


Tormented and not able to go on without her, he committed suicide by his own blade. Just at the instant that Pyramus took his dying breath, Thisbe ran back and threw herself on Pyramus’ dead body. Lovelorn she grabbed the blade and pierced it into her own body.

The white mulberries were coloured crimson by Pyramus and Thisbe's bloodshed.

The mulberry tree with the crimson coloured mulberries have stayed that way ever since. Some say that Zeus placed Thisbe's veil in the sky as Coma Berenices, drifting down near Leo the Lion.

Go from Leo Mythology to return to Zodiac mythology Main

Want a Leo astrology sign to be attracted to you?

Find out the Leo Love Matches

Find the rising signs for a Leo birthday

Read about the Leo sign combined with rising signs