The Definition of Astrology -The Sun’s Retrograde


In writing about the many categories of the definition of astrology, I will start with the Sun.

Every year the sun fails (by a little) to make a full circle to the exact place it was in 365 days.

As a consequence, the Sun comes back to a place a bit behind the point it started the year before.

In writing about the many categories of the definition of astrology, I will start with the Sun.

Every year the sun fails (by a little) to make a full circle to the exact place it was in 365 days.

As a consequence, the Sun comes back to a place a bit behind the point it started the year before.

Each zodiac sign is thirty degrees in measure. The Sun falls short about 1 degree every 72 years.

The sun then goes through one zodiac sign, in about two thousand one hundred sixty years, and through the full zodiac in about Twenty-five thousand, nine hundred and twenty years, (these figures are not exact).

This movement is called the precession of the equinoxes.

It means that in 25,920 years (also called Great solar or Platonic year).

Each one of the 12 zodiac signs inhabits a place at the Vernal ( Spring or March) Equinox for about two thousand, one hundred sixty years, then relinquishes that position to the zodiac sign before it.

The 2,160 yrs that the Sun takes to journey through the zodiac is called an Age.

The Age gets its name from the zodiac sign that the sun transits through each year that it goes over the equator on the spring equinox.

From this system we get the names:

During these Ages, spiritual worship takes the form of the appropriate zodiac sign.

The Definition of Astrology - Basic Rules


The ancient people believed that astrology at it's core meant that the Stars or Planets ruled our fate and fortune or more specifically that the Planets and signs (Stars), that a person was born under determine what character traits are innate in them.

They also believed that the Moon and the Sun have more influence on Earth and so it was natural to conclude that the position they take in our birth chart also had the most influence on us.

Since they believed that the Sun and Moon had the most influence on us and that the Sun is the more powerful of the two then, the sun therefore has the most affect on us.

It was thought that a baby born under moonlight would mature, progress and develop personality traits at a slower pace than the babies born under the suns beams.

So in other words they may be what you call a late bloomer in most of the important stages of life.


There are 2 clear-cut systems of rules of astrology doctrine:

(Claudius Ptolemy/Claudius Ptolemaeus), the Geocentric: the Earth is the center of the solar system, with the Sun, Moon and Planets circling it.

Astronomers may consider the Geocentric system wrong, yet for thousands of years it has been proven truthful when it is applied to real life and earthly matters.

The other astrology doctrine is called the Heliocentric (Aristarchus of Samos), which submits that the sun is the center of the solar system with the Planets and their Moons circle it.

What should be noted in this is that when the Sun was said to be in a zodiac sign the ancients intended that the Sun inhabited the polar zodiac sign and cast its rays onto the zodiac sign mentioned as the Sun sign.

When it was said that a person was a Sun sign Sagittarius in Astronomy wise it meant that the Sun was housed in Gemini, but was shining on Sagittarius.

The Definition of Astrology, Separate From Astronomy


What do Astrologers and scientists think the definition of Astrology is?

If you were to ask an astronomer or scientist the definition of Astrology. The scientist or astronomer would probably say never mind that, it's a pseudoscience anyway.

There is a reason that most men of science may think Astrology is a fake science and should be laughed at. It's probably because Astrology isn't an exact science like Math is.

Even so, Astrology uses mathematics, to give you your astrological story.

Modern scientist may remove astrology from it's partner astronomy, but most of us that believe know they are wrong don't we?

The ancients also believed that the signs of those seasons have traits that prevail in the people born under them, we believe this too.

The stars in the sky don't look the same as they did then, we even have newer Planets and a Planet that has been down-graded.

We now know that the Earth goes around the sun. But as far as astrology goes, this hasn't changed how accurate astrology can be. We know that Aries the Ram as a zodiac sign stands for the Spring Season and not to the astronomical constellation of Aries.

The same goes for to Pluto one of our Planets that has been bumped down. Astrology is derived from experiment and observation and is an emblematic system of rules. These precepts are essential.

The Definition of Astrology -Different Cultures:


Nearly every religious faith of the world has shadows of an astrological influence. The Old Testament of the Hebrews, although, its writings were eclipsed by Egyptian civilization, is collection of astrological and astronomical parables.

Kabbalists say that the original twenty-two letters of the Hebrew alphabet divided into a groups of 3 (Fire, Earth and Water).

A group of 7 (The Sun, Moon, Mercury, Jupiter, Venus, Saturn, and Mars), and then linked to the days of the week (7) and finally to a group of 12 meaning the 12 signs of the zodiac and the months they govern.

These groups (letters) forming a multitude of words, when properly read they augured events. Read more about Kabbalah.


Incidentally, the 12 characters also connect to the 12 Tribes of Israel (Jacob). 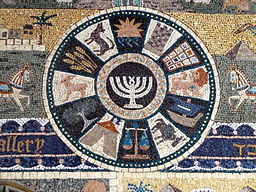 
The following shows the twelve signs with their corresponding twelve tribes :

Find out more about the tribes .

Go from
definition of astrology to page 1 2

Find out meaning of the zodiac

Find out how to  using attract the 12 signs of the zodiac.

Read about the Mythology stories for all 12 zodiac signs

Learn why using Love signs in your relationship is important

Read about the History of Astrology