Pisces Mythology, What is it about?


In Pisces Mythology, Pisces has always been the fish.

In the Greek legend, Pisces is connected to how Aphrodite and her son Heros or (Eros) eluded the deadly monster, Typhon.

Aphrodite and Heros or (Eros) turned into fish, and bound their fins together to make certain they weren't split up.

Even today, many depictions of Pisces show two fishes bound together with a cord or two fishes with a line or bar joining them as one. 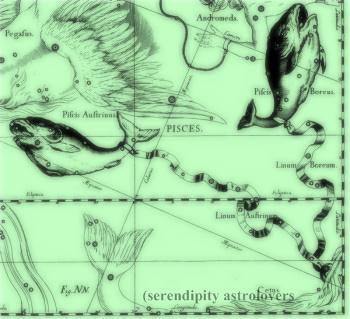 According to another version, The Ikthyes (or Ichthyes) were a pair of large Syrian river fish who rescued Aphrodite and Eros when they were fleeing from Typhon.

It is also said that these fish attended to the birth of Aphrodite by carrying Aphrodite onto land after she was born in the sea.

Still another myth says that Pan the goat god changed into a goatfish (Capricornus) and leapt into the river to salvage Aphrodite and Eros.

In all these renderings of the narration, the fishes were committed to the stars as the Constellation Pisces.

Both the Sumerians and Akkadians have a similar meaning to their words and these definitions answer for the mutual icons of Pisces as 2 fish connected by the fins.

Go from Pisces Mythology and return to Zodiac mythology Main.

Want a Pisces astrology sign to be attracted to you?

Find out the Pisces Love Matches

Find the rising signs for all Pisces birthdays

Read about the Pisces sign combined with rising signs

Learn some methods to seduce Pisces