Aquarius Mythology, What is it about?

One Aquarius Mythology story is the Greek myth of Ganymedes, the cup-bearer of the gods. Ganymedes was the son of Tros, king of Troy (some say that he was also son of Dardanus).

Ganymedes was the first human to be made a deity.

Ganymedes was a beautiful juvenile who caught Zeus' fancy.

Zeus turned into a bird, (symbolized as the constellation Aquila) grabbed Ganymedes and brought him to Mt. Olympus to be cup-bearer to the deities (sort of like a valet de chambre or a mythical boy toy).

Another rendering of this story tells f how Zeus sent off his pet eagle (Aquila) to bring Ganymedes to Mount Olympus.

At any rate, when Ganymedes got to Mt. Olympus, he had to deal with the ire of Zeus' wife Hera.

Hera was pissed off and jealous because of 2 things - one, Zeus seemed almost in love with Ganymedes who was after all a boy, two, Ganymedes got the privileged job that her daughter Hebe (Goddess of youth) had as the cup-bearer.

Zeus couldn't care a less what Hera had to say.

Ganymedes wasn't going anywhere. Zeus frequently took Ganymedes with him on rides on Aquila (the bird) with Ganymedes always holding the gilded cup.

Ganymedes always went with Zeus on his jaunts, and moved him with his geniality. 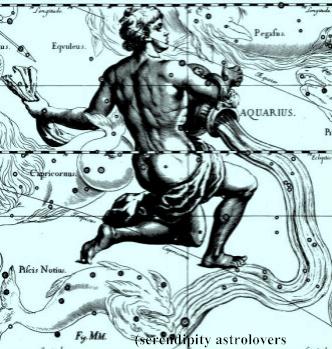 It was made evident when, Ganymedes saw how the world needed water and begged Zeus to let him serve them and Zeus told him he could make it rain.

In time, Ganymedes was exalted as Aquarius, god of rainfall, and Zeus placed him in the heavens.

In another ancient Hellenic adaptation of the Aquarius mythology, Aquarius typically looks like a man that's pouring out a stream from a bucket. Aquarius is the water pourer who deluged the world in the Great Flood.

*In and of itself, the constellation Eridanus (the ancient Greek identity for the Po River) represented the river poured by Aquarius.

*Ganymedes is bordered by water constellations. Near Ganymedes are Pisces the Fishes, Eridanus the river, Delphinus the dolphin, and Cetus the sea monster.

*In a poetry verse, Ganymedes was the model of the gorgeous youth.

*Ganymedes also symbolized homosexual romance; these two symbols were a direct counterpoint to Helen of Troy in her symbolic persona of heterosexuality.

*Among the earliest acknowledgment to Ganymedes was in Homer's epic poem the Iliad.

Aquarius Mythology and the Babylonians

Aquarius is one of the oldest zodiac signs, As the Water bearer; Aquarius is older than the Babylonian Empire period and was marked on their stones.

The Babylonians thought of Aquarius as a bad deity.

They related the month that the Sun was in Aquarius as the month of "the curse of rainfall."

In Egyptian Mythology, people who populated dry lands thought of Aquarius as a charitable deity who made rainfall when they needed it for farming.

To the Egyptians, Aquarius streamed water into the River Nile at the time of year when the Nile runs over its banks. This river water adds to the water needed by the tilled land on the edge of the river.

Want an Aquarius astrology sign to be attracted to you?

Find the rising signs for an Aquarius birthday

Read about an Aquarius sign combined with rising signs

Learn some tips for an Aquarius seduction