If You have a choice, I would say you should not entangle yourself with this man. But, since you are probably in love already and your looking for clues, here they are:

In his mind no one is above him just because, it has to be proven to him first, then and only then will he admire them.

He likes to be around people who he considers intelligent and interesting in some way.

He doesn't like anything mundane. You can't change him into someone who finds value in boring routines, accept him for that or learn to abide by it.

He believes we ought to be paid and we need to eat, but he isn’t preoccupied with financial security.

He likes to have employment because work keeps him keen, keeps him learning. He tends to move from one job to another if they offer him any of these things.

Do not gush to him about your feelings for him, it will not bring him closer nor make him respond in kind.


This man drives you wild, you adore the way he makes you feel.

Astrologically, you aren't a well matched couple.  If you get involved, don't expect much, be like him and go with the flow.

You are an odd couple; you don't have many similar qualities, yet the contrariness in who the two of you are draws you together rather than repel,  you somehow click.

His fondest hope is to be free, detached; your fondest wish is to be connected, bonded.

Here is an obstacle that the two of you need to overcome;  you need to figure out what is important to the relationship that you have together.

Taurus and Aquarius -Points of Conflict


You will go through times that you have a hard time communicating with one another.

If ever this man has a friend in trouble he will be there for him or her, don't make him chose between you and his friends because you are jealous, he may chose them; he won't feel bad that you feel neglected.

You are both great flirts, he flirts a little too well, you may become suspicious that he will step out on you; he you may try to do that.
You shouldn't worry, if any zodiac woman can keep him true, it is you.

You have probably experienced jealousy at different levels in other relationships. This man will put you through the most anguish by  way of jealousy, then any other man before.

Taurus and Aquarius - How you Fight or Don't Fight


When you are having a disagreement with him, he makes you more angry, because he acts undisturbed by anything you say, when other men at least would have something to say.

Always speak to him about conflicts you have when your mind is cooled and you can be totally honest with him. Getting all emotional is something that hinders good decisions.


You have a strong and steady libido, sex is very necessary; he has many things that are more important to him than sex. Of course when he needs a physical release he satisfies that need, even still his position on sex will leave you frustrated.

Once you figure out what he thinks about sex, you will argue the point that other things are more important to him and that sex should be an important part of a loving relationship, he will only think you require more than he can give and that you are hard to please.

When you do have sex, it's racy,  imaginative and daring; you have a good time in bed with Aquarius, I know.

Aquarian men can get really kinky in the bedroom, they are very, very open-minded and will want to try many things.

The normal you may balk at some of the things he has tried and what he says he wants to try.

If you can be more open-minded, not only will he be more engaged in sex with you, you'll discover how great he is in bed and how many erogenous zones you really have.

Remember that he won't need to have sex as much as you, so, you might as well get the full experience of Aquarius sex, when you do have it.


In the end, he may think you're too headstrong, too traditional, too restricting and inflexible to deal with.

You might think he is too eccentric, too unusual, too  outlandish, and  unbalanced to take seriously.

You could just make him a male platonic friend that can give you advice and come and give you a shoulder to cry on when you have been hurt. And instead of being the girlfriend that is left to fend for herself because he just had to be there for his friend, you are the friend in need.

You may have a good relationship together, you might even get to married, depending on how your charts mesh, you may not work out at all.

But, he will always want to be your friend, awww. 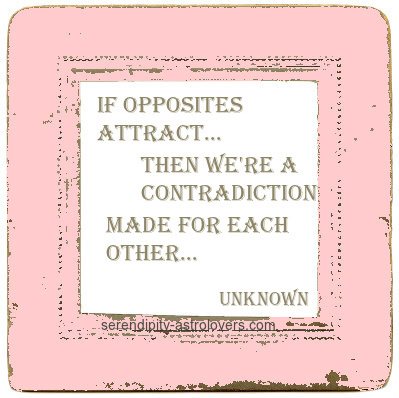 Go from Taurus and Aquarius to Astrology Sign Compatibility Main